800th Centenary Celebrations of the sealing of the Magna Carta

Bury St Edmunds has a pivotal role in the history of Magna Carta. One chronicler relates that in 1214 a group of Barons met in St. Edmunds Abbey Church and swore an oath to compel King John to accept The Charter of Liberties, a proclamation of Henry I. It was the direct precursor to Magna Carta a year later.

The original 'Great Charter' was agreed by King John on 15 June 1215 when he acceded to barons’ and bishops’ demands to limit his powers and directed that it be sealed.

Council awarded a grant of £5,000 to the Bury St Edmunds' Magna Carta 800 celebrations taking place during 2014 which was used in the following ways: 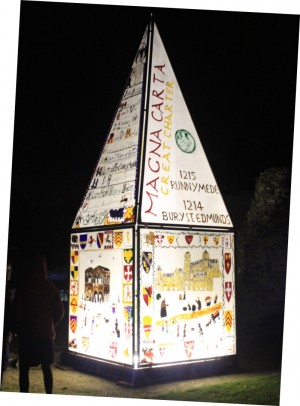